Green was involved in an intimate relationship with Lt. Kara Foster aboard the Nathan James, which is against Navy regulations. He discovered Foster's pregnancy when she was a volunteer human testing subject for the experimental cure; he supported her during her bad reaction to the cure.

In the season two finale Kara and Danny get engaged. In the season three premiere, it shows up that Danny and Kara are already married when Captain Chandler calls her "Mrs. Green". Kara and Danny have now a baby boy named Frankie, in honor of Danny's deceased friend Franklin Benz.

He is portrayed by Travis Van Winkle.

He is from Connecticut.

Danny is assigned to the USS Nathan James with his Mountain Warfare Team. Months later, he combats Russians with Lt. Franklin Benz in the Arctic whilst guarding Doctors Rachel Scott and Quincy Tophet. After the Nathan James encounters a cruise ship, he is sent to scavenge the ship for food supplies. While on board the cruise ship LT’s Benz and Green encounter many diseased corpses. Lt Benz trips over one of these corpses causing his hazmat suits oxygen mask to sever from the visor. Danny along with captain Chandler attempt to get Frankie to return to the ship for treatment. Franklie refuses and takes his own life to prevent the spread of the red flu on board the Nathan James. Frankie’s death affect LT Green deeply. He is later seen being comforted by Lt Foster in His quarters. (“Phase Six”)

Danny leads Cobra team on a supply run to a hospital for Dr. Scott in Guantanamo Bay. (“Welcome to Gitmo”)

He dispatches two Navy Mountain Warfare members to recon a coral reef. Later, he and his then-lover Lt. Kara Foster are sent disguised as Rachel Scott and Quincy Tophet to the Kirov-class battlecruiser anchored outside of Guantanamo Bay. He breaks up with Lt. Foster afterwards. Eventually Danny and Lt. Foster get back together. (“We'll Get There”)

Danny joins the team that is sent to retrieve monkeys for Dr. Scott in Nicaragua. He is then held hostage at El Toro's camp along with Chandler, Slattery, Jeter and an injured sailor. After he is freed, he helps kill the guards in the camp. (“El Toro (Episode)”)

Danny comes down with an illness that panics the crew. Danny‘s illness sparks up grumblings throughout the ship. Many believe that he was Infected as a member Of the land team in Nicaragua. Danny’s Ilness turns out to be dengue fever. the officers lounge in which Danny collapsed soon became quarantined. Lt Foster burst in much to the dismay of captain chandler. She simply told him that she and Danny ate lunch together and If He was sick she was too. Captain chandler bought it until later when it was revealed that Lt Foster and LT green had a romantic relationship. (“Lockdown”)

After receiving a distress call, Danny leads one of the two teams that is sent to board the stranded ship. (“SOS”)

He leads a small team that rescues Chandler and Tex from the Russian ship and plants charges throughout the ship. (“Two Sailors Walk Into a Bar”)

In episode 9 (Trials) it is discovered that Lt. Foster is pregnant with Danny's child. Danny finds Out about Lt. Fosters pregnancy from captain chandler. Danny is then allowed to see Lt Foster and comfort her as she suffers from The red flu. Eventually Dr Scott’s cure works and Danny goes back into her lab to tell Lt Foster that she is pregnant. (“Trials”)

The following are the medals and service awards fictionally worn by Green. 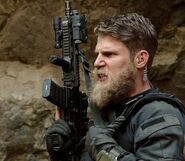 Add a photo to this gallery
Retrieved from "https://the-last-ship.fandom.com/wiki/Danny_Green?oldid=15941"
Community content is available under CC-BY-SA unless otherwise noted.