Shot in a firefight with Shaw's security personnel

Kenneth "Tex" Nolan is a private security contractor who met the crew of the Nathan James at Guantanamo Bay Naval Base. After working with him to diffuse an enemy threat at the base, Commander Tom Chandler invited him to join them on their mission to create a vaccine for the virus. He dies on the season 3 finale during the rescue of Tom Chandlers kids.

Not much is known about Tex's early life. It was revealed the third episode of season 2 that Tex has a 14 year old daughter named Kathleen Nolan who he hasn't seen in three years.

It is unknown when or how long Tex was a Private Security Contractor. However, during his career, Tex was stationed as a guard in Guantanamo Bay and would subsequently meet the crew of the Nathan James.

The crew first meet Tex at Guantanamo Bay. He is held at gunpoint and warns Commander Chandler of Al-Qaeda terrorists making their way to the USS Nathan James. He is released and explains Chandler the situation in the base. Later, he helps the team raid the Warehouse and is yet again, held at gunpoint by the Al-Qaeda leader. Chandler managed to kill the leader and Tex is taken to the Nathan James. He joins the crew on their quest to find a cure. (Welcome to Gitmo)

Tex is initially skeptical in regards to the idea of having human trials and people volunteering for it. However, Tex then decides to volunteer himself. Tex is injected with the virus, followed by the vaccine and is then quarantined with the other six volunteers. After some amount of time, Tex along with the rest, experience side effects from the early stages of the virus. After the volunteers start to die, Dr. Scott manages to create a cure to the virus and administers it to them. (Trials)

Tex accompanies the team heading to the port. He greets the State Troopers that arrive and is brought to Amy Granderson's headquarters. Afterwards, he tells Dr. Scott that he was leaving saying "He's moving on." and shares his first kiss with her. Later, he roams the streets of Baltimore, leaving the crew. (No Place Like Home)

He wanders the streets until he meets a street kid who tells him the truth about Granderson and Baltimore. Afterwards he returns to the Avocet compound to join security. After he infiltrates, he finds Dr. Scott and kills her "escort." After Scott learns of Hamada's plan to extract the cure from Foster's child, he leads the way and helps secure her, killing the security guard, after Foster had already killed Hamada. Tex helps Scott and Foster get out and kills a State Trooper that attempts to block the fleeing masses from leaving Avocet on Granderson's orders.

In "Cry Havoc", Tex is part of a shore team with Slattery and Green during the final battle with the Achilles. After finding out that the Achilles has a shore anti-ship battery, the team engages the Immunes protecting and manning the battery. Tex goes hand to hand against one of the Immunes, eventually snapping his neck while Green saves him from being shot from behind. With the battery under their control, Slattery fires upon the Achilles, along with the Nathan James, eventually sinking the rogue submarine.

In "A More Perfect Union", Tex departs the ship to search for his wife and daughter. He locates the place they were staying and finds out that his wife was killed by looters but his daughter survived and is heading for where the Nathan James is spreading the cure. Tex goes after her, learning from an infected man (who he cures) that the Immunes are planning on exposing innocent people to the virus to destroy the people's trust in the Navy. Tex reunites with his daughter and teams up with a team from the Nathan James in Memphis to stop the Immunes. He succeeds and in St. Louis introduces Doctor Scott to his daughter Kathleen while helping pass around the cure.

In "Legacy," Tex escapes from Roberta Price and recruits his daughter to help rebel against Allison Shaw and the regional leaders' corrupt regime. After reuniting with Kara Foster, Tex's group rescues President Howard Oliver from a press conference where he is being forced to dissolve the central government.

In "Resistance," two weeks later, Tex's group continues to make their way west across the United States to meet up with the Nathan James in San Diego. However, the group witnesses the apparent destruction of their ship, something they all agree they want revenge for. Forming into an ad hoc resistance movement, Tex's group plots to attack Manuel Castillo's distribution center, only to be reunited with the friends from the Nathan James who had faked their own deaths. Tex and Chandler are reunited for the first time since Rachel Scott's death, Tex having left St. Louis quickly after her murder. Tex admits that he blamed the both of them, but while he forgave Chandler, he could never forgive himself for it. Tex takes part in the plan to derail Castillo's train, only to learn that the train is loaded with people. Tex and Chandler manage to stop the train in time and Tex returns to the Nathan James following Castillo's arrest where he is reunited with his old friends.

In "Don't Look Back", Tex leads the team to capture Price, but finds her gone. His team later arrives at the St. Louis White House in time to rescue Kara Green, Sasha Cooper and Carlton Burk from danger. Tex helps ensure rescue of Chandler's children from Allison Shaw before sneaking aboard her plane to rescue Chandler himself. Tex takes out Shaw's guards, enabling Chandler to take over plane. However Tex is shot during the gunfight and dies, telling Chandler that he's a good man. Chandler then shoots Shaw dead before Slattery enters and finds Tex dead to his horror.

In "Commitment," after the sinking of the Nathan James, Tom enters a dream version of the ship containing many of the people that he has lost along the way. Most prominent among these is Tex who calls where they are Davy Jones' Locker and encourages Tom to continue living, though Tex says he can't come back with him. After his conversation with Tex, Tom awakens underwater and after staring at his ship sinking into the depths, choose to swim to the surface and live. 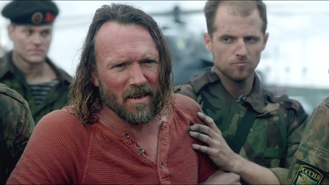 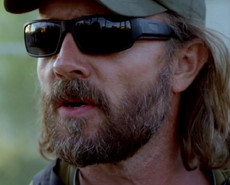 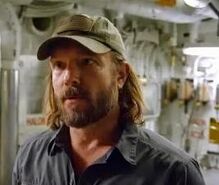 Add a photo to this gallery
Retrieved from "https://the-last-ship.fandom.com/wiki/Tex_Nolan?oldid=15947"
Community content is available under CC-BY-SA unless otherwise noted.