The USS Nathan James found the cure, and the United States Navy has since begun to rebuild. It has at least three operational ships operating in the Pacific Theatre, all destroyers. Captain Chandler was promoted to the Chief of Naval Operations under President Michener. 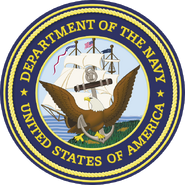 Sailors
Add a photo to this gallery
Retrieved from "https://the-last-ship.fandom.com/wiki/United_States_Navy?oldid=15552"
Community content is available under CC-BY-SA unless otherwise noted.